To backyard gardeners who love to muck around in real dirt, growing plants in water somehow seems other-worldly  but the science of doing so, known as hydroponics, is a well established technology. Soil in natural conditions serves as a reservoir for water and plant nutrients, but plants don’t actually require soil to survive. Nutrients are absorbed by plants through roots as inorganic mineral ions dissolved in water. So long as plant roots have access to water containing essential minerals, plants can survive without soil. Since plant survival also requires access to oxygen through roots, roots cannot be completely and perpetually immersed in water unless it is adequately aerated or else the plants will drown. Plants can be grown hydroponically in solution using something as simple as a water in a Mason jar, but more frequently growers use an inert medium in which to grow the plants such as perlite, gravel, mineral wool, or coconut husk.

Hydroponic gardening has virtues that offer special advantages for growing plants in an arid climate like Cairo’s. In soil-based farming, applying the right amount of water is a tricky business. Too much watering causes plants to die from a lack of oxygen, and too little leads to plant starvation. For hydroponic farming, plant roots can be continuously or frequently exposed to nutrient-laden water and the plants can absorb as much or as little as they want. Unused water can be drained away and recycled keeping water use to a bare minimum.  The key challenge for the hydroponic approach is to get the balance of needed mineral in the water just right, including macronutrients such as nitrates, calcium, phosphate, and magnesium, and micronutrients such as iron, copper, zinc, boron, chlorine and nickel. In addition to an appropriate balance of nutrients, care must be taken to not let the water’s pH get out of whack or salts to build up excessively. Any interruption in water flows can be catastrophic, and water must be stored in light-free tanks to prevent the formation of algae. A successful hydroponic system can achieve high levels of productivity with a modest water and nutrient input. 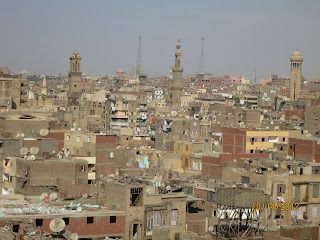 The other central ingredient in plant growth is sunshine, something that the rooftops of Cairo have in abundance year around. The city’s low income residents have long used rooftops to raise chickens and goats but not to grow crops. Looking out over Cairo's rooftops from a minaret or any other high vantage points, one sees mostly accumulated debris, satellite dishes, and virtually nothing green. The dream of social entrepreneur, Sherif Hosny, is to create 325 hydroponic rooftop gardens in Cairo by 2013. Hosny named the business, Schaduf, after a simple traditional Egyptian tool for raising water to higher ground for crop irrigation. Sherif’s brother, Tarek, will join the business after completing his college education in the U.S. 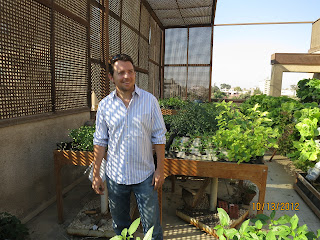 The business offers Cairo’s poorest residents a simple form of hydroponic farming. Construct on a family's rooftop three 20 square meter ponds made of brick sides about 10 centimeters high and place a waterproof liner on the inner surface, fill with water and cover with sheets of floating styrofoam to serve as a platform for plants, and install a circulating pump for oxygenating the water. Add a standard hydroponic nutrient mix and plant the seedlings. Come by and check the pH and electrolyte levels weekly, replenish nutrients as needed, and soon with the help of Egypt's sun and heat you will have a rooftop of green produce that can be sold for 300-500 Egyptian pounds a month, significantly increasing a Cairene's family income and creating a wonderful place for children to play that pulls them away from the dangers of the streets. Sherif's company, Schaduf Urban Micro Farms, will provide a poor family with a rooftop farm costing about 4,000 Egyptian pounds that can be financed with a micro-loan easily paid off in a year. So far Schaduf has installed and maintains 15 farms, periodically checking the nutrient mix, controlling any pests organically, and collecting and selling the produce in a local Zamalek farmer's market for its clients. 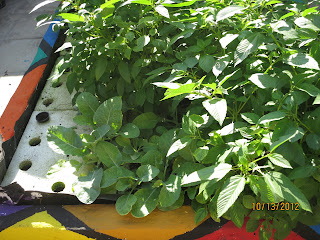 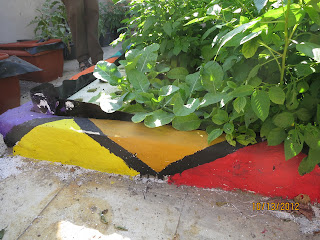 While visiting Cairo, my wife and I, along with our son and his boss, ate a celebratory dinner costing 2,000 Egyptian pounds at a fancy restaurant on the Nile called the Sequoia, a place where Cairenes go to be seen. This means roughly that a low-income rooftop garden costs about 8 Sequoia meal equivalents, an amount of money that doesn’t mean much to us affluent westerners, but can make a huge difference to the lives of Cairo’s urban farmers.

Leaving a successful career as the Middle East Regional Managing Director for mining Giant Rio Tinto Alcan, Sherif Hosny moved on to become a creator of rooftop gardens. Ask him why he gave up a lucrative career to take up urban farming, he will tell you that he wants to help others, likes working with plants, and desires to earn enough income to live on. In these motivations, Hosny differs little from Ibrahim Abouleish, the founder of SEKEM. While he grew up in a Muslim family, Hosni doesn’t claim that his faith played any special role in his decision to found Schaduf, yet what he is doing satisfies Islamic premises much like SEKEM does.

Hosny chose to do a business rather a nongovernmental organization (NGO) so he wouldn't have to worry about raising money for operations, and he wanted the people he helps to have a vested interest themselves in sustaining the final product, the rooftop farm. If nothing else, Schaduf’s clients will work hard to pay back the micro-loans they take out for their farms, and once they do, their take-home income jumps, encouraging them to keep their efforts up. NGOs are a part of the picture for rooftop farming and make a difference for Schaduf by helping to identify eligible clients and arranging micro-loans. The beauty of the whole venture is that it is self-funding and can be readily scaled up as the business grows.

Hosny continues to work on new ideas for rooftop farming, including an organic nutrient mix to replace the standard chemical variety. Schaduf's most important innovation to date has been the development of the simple brick-sided floor pond to replace the usual wooden racks hydroponic gardeners typically use for plant trays, which turn out to be uneconomical in Cairo because wood is too expensive. In the past Hosny experimented with an aquaponic approach to micro farming using tilapia, but the fish couldn't survive Cairo's winter temperatures in the shallow tanks required by a rooftop location, and heaters proved to costly for his low-income clients. Schaduf is considering selling rooftop hydroponic gardens to more affluent customers who want to grow their own plants and create a green space for their family. This would augment Schaduf's sales and income and increase the scale of its operation allowing the venture to better serve its low-income farmers.

Sherif Hosny fits the classic definition of a social entrepreneur, someone engaged in business to solve social or environmental problems, not just to earn profit. Schaduf and Hosny offer opportunities for poor families to increase their income, expand the supply of healthy greens for Cairenes, and create much needed green space in a city that has very little. In this effort, Hosny and Schaduf engage in social invention—the search for new and innovative methods for solving social and environmental problems. Schaduf not only applies a time-tested technology in a new way, but is creating a new form of pesticide-free agriculture that functions without fossil fuel inputs and requires very little water, a huge benefit in a desert environment. Schaduf, like any other entrepreneurial venture may or may not work out, and if it doesn't Hosni will move onto something else. Given the important functions Schaduf fulfills, I hope and suspect that it will succeed and contribute to a better future for Egyptians.

For my latest blog entries, go to:
postmaterialeconomics.blogspot.com

Doug Booth
I am a retired economics professor and a founder of the Driftless Area Land Conservancy, Dodgeville, WI. My essential passion is hiking, wildflower photography and botanizing in the Mountain West. I live in Milwaukee with my beautiful wife, Carol. I have two wonderful sons, Edward and Jeremy. Paperback or digital copies of my books, ECONOMICS FOR A POST-MATERIAL FUTURE or THE COMING GOOD BOOM, can be purchased at Amazon.com. 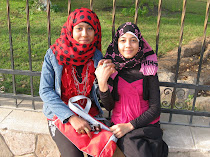 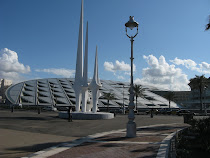 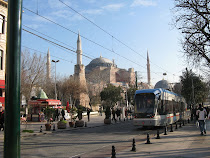